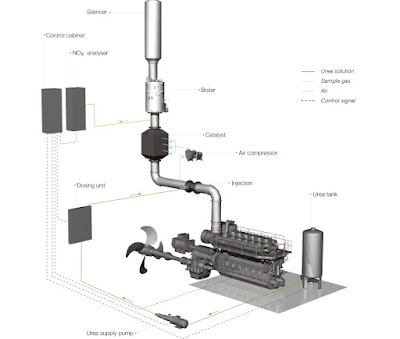 These are measures designed to remove NOx from the exhaust gas by downstream cleaning technique. The most common secondary measures are –
The advantages are:-


Scavenge Air Moisturizing & Exhaust Gas Recirculation for ME
For both scavenge air moisturizing (SAM) systems and the exhaust gas recirculation (EGR) system, the NOx reducing effect is achieved by reducing the local maximum combustion temperatures in the combustion chamber. 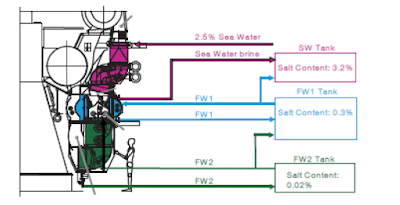 Scavenge Air Moisturizing:
One temperature-lowering technique, called Scavenge Air Moisturizing (SAM) by MAN and known generally as Humid Air Motor technology, is to increase the moisture content of intake air. SAM uses seawater to cool and humidify air coming out of the intake compressor, and then uses fresh water to remove the salt from the system before it can damage the engine. The system requires specially-shaped components, special materials and auxiliary machinery systems for handling the humidification water, all run by a programmable logic controller.
The SAM system has a seawater injection stage, where a surplus of seawater is injected for saturation and cooling of the hot air from the compressor. The seawater stage will provide a near 100% humidification of the scavenge air and supply all of the water for humidification.
The freshwater stages 1 and 2 will be near temperature neutral to the scavenge air and create a small freshwater production depending on the operation parameters chosen. The freshwater stages only act as cleaning stages for removal of any salt which may pass with the air from the seawater stage. A continuous accumulation of salt in the freshwater stages would eventually cause the salt content to reach an unacceptably high level. This is counteracted by cooling the saturated air with the air cooler and generating some extra
freshwater for stage 2. The extra freshwater is then sent upstream on the tank side of the SAM system. Thereby the content of salt in the freshwater stages can be controlled 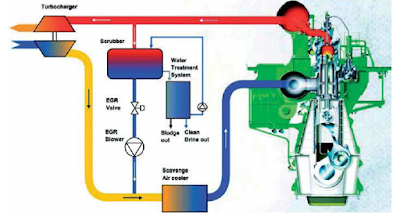 Primarily marine diesel operates on residual fuel that contains sulfur. Products of combustion, therefore, contain corrosive gases that require to be taken into account while designing an EGR system. Furthermore, marine diesel being turbocharged engines, the scavenge pressure is higher than the exhaust pressure.
This requires an additional exhaust blower. This system is an effective means of NOx reduction. With a 20% EGR NOx reduction is in the order of 50% with very little fuel consumption penalty.

Popular posts from this blog

Difference Between A, B & C-Class Divisions?

May 19, 2019
IMO Symbol A Class Division  IMO Symbol B Class Division  SOLAS has tables for structural fire protection requirement of bulkheads and decks. The requirements depend on the spaces in question and are different for passenger ships and cargo ships. The Administration has required a test of a prototype bulkhead or deck in accordance with the Fire Test Procedures Code to ensure that it meets the above requirements for integrity and temperature rise. Types of Divisions: "A" Class "B" Class "C" Class "A" Class: "A" class divisions are those divisions formed by bulkheads and decks which comply with the following criteria: They are constructed of steel or equivalent material They are suitably stiffened They are constructed as to be capable of preventing the passage of smoke and flame to the end of the one-hour standard fire test. they are insulated with approved non-combustible materials such that the average tempera
14 comments
Read more

Why do we blow through engine before starting ?

August 16, 2018
The engine is blown through on air before starting it : a) To Blow out through indicator cock any residual exhaust gas or     other products of combustion trapped inside the cylinder after     shutting the engine. b) To check if any jacket cooling water from cylinder head or     turbocharger or any other source, has leaked while the engine          was shut and collected on top of piston. If while blowing                  through, water comes out of indicator cock or relief valve, we          need to investigate and rectify the fault before starting the                engine. It is imperative that the engine is blown through before        starting. There have been cases where the generator engine has        been started from control room without bothering to blow     through first, and water collected on top of piston has resulted in      a bent connecting rod and broken piston.( Reason – water can          not be compressed )
10 comments
Read more

November 16, 2019
Oils containing water can only be de-watered in a perfect manner if the bowl is accurately adjusted to the difference in densities of oil and water. The gravity disc with proper inner diameter i.e. with the diameter that corresponds to the difference in densities of the oil-water mixture to be treated should, therefore, be inserted in the bowl, This disc can be chosen from the set of disc provided with the separator. The inner diameter of the disc to be chosen can be determined by:  Calculation   Experiment The general rule is : Small diameter gravity disc when treating heavy oil Large diameter regulating ring when treating light oil Determining the size of gravity disc by calculation: For a given separating temperature, the inner diameter of the gravity disc and if the desired density of the oil can be determined from the diagram, provided that the density of the oil at a temperature ranging 15℃ and 90℃ is known. For example; Given: Density of oil at 20℃            ρ oil
7 comments
Read more